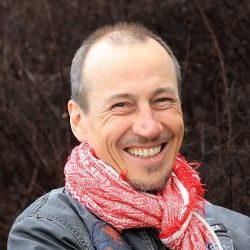 Assoc. Prof. Marko Komac, Ph.D., EurGeol #1294, currently an independent consultant, the President of the European Federation of Geologists (EFG), an external researcher at the Faculty for civil engineering at the University of Ljubljana, an Associate Professor for GIS at the University of Nova Gorica and a Member of the Intraw Observatory Board as the Treasurer. From 2006 to 2014 Marko was the director of the Geological Survey of Slovenia where he also worked as a part-time researcher. From November 2016 to May 2019 Marko was a member of the Board of EFG, where he served as the External Relations Officer. From 2012 to 2016 he was a Vice-President of the IUGS, and in years 2011 and 2012 he was the President of the EuroGeoSurveys. He has more than 22-year experiences in the field of landslide analyses, geographical information systems (GIS), application of remote sensing in geology, spatial analyses and modeling, geostatistics, mass-movements analyses, management of organisations and teams, and international networking. Currently, he’s involved in several EU-funded geological projects. He's an author or co-author of over 500 bibliographic units mainly from the above-listed research areas and several times IronMan 70.3 finisher.