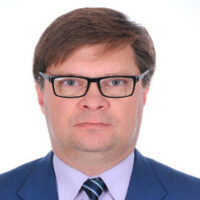 Alexandr Chernykh graduated from the Novosibirsk State University; in 1993-2000, he worked at the Joint Institute of Geology, Geophysics, and Mineralogy, Siberian Branch, Russian Academy of Sciences, where he supported a Ph.D. thesis in petrology and volcanology. In 2000-2009, he specialized in production geology, in FSUE Zapsibgeolsyomka. In 2009, he moved on to JSC SNIIGGiMS where, as Head of the nonfuel minerals department and Deputy General Director in science, he studied Siberian metallogeny (precious, base, rare, and radioactive metals) and performed research to validate prospective geological and economic gold mineralization types in the Altai-Sayan folded belt. In 2016-2018 he held the position of the First Deputy Director General in FSBI “TsNIGRI”. Since December 2018 up to the present, he holds the position of the Director-General in FSBI “TsNIGRI”.

The practice of using modern geophysical, geochemical, remote sensing and other methods.