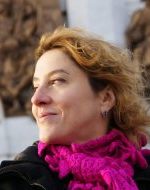 Daria was born in Moscow. Graduated from VGIK (Faculty of Film Studies).

Has been filming documentary films since 2010.

2009-2018 - Associate Professor of the Department of Mass Media at the Moscow State University of Culture and Arts.

Since 2014 - head of the film and TV directing workshop.

Laureate of Russian and foreign film festivals, participant of international forums and pitches.

Member of the Union of Cinematographers of the Russian Federation, member of the Guild of Non-Feature Films and TV.

The general director of the "Magic Mountain" studio.

"Who will be my husband?" https://www.youtube.com/watch?v=hIsvhfheNv4&t=1s

Prize of the Archival Film Festival at the State Film Fund for the best TV program about cinema "Masterpieces of Old Cinema", 2006

Production: "VIB-Film", studio of Andrey Shemyakin (with the support of the Ministry of Culture of the Russian Federation)

- film-participant of the out-of-competition program of the OPEN PLACE festival, 2013 Rezekne, Latvia

- Laureate of the III Moscow Youth Film Festival "Let's Live!" , 2013. Prize in the category "Honestly about this" Moscow, Russia

-Diploma "For loyalty to the ideals of V. Shukshin"

- a film-participant of the International TV Forum "Together", 2014 Yalta, Russia

"The Baron's Last Campaign", 77 min, a documentary film with reconstructions, director/author, 2015 Production: "VIB-film", studio of Andrey Shemyakin (with the support of the Ministry of Culture of the Russian Federation)

"Who will be my husband?", 64 min, documentary, director/screenwriter, 2015 Production: "Foundation for Ethnogeographic Research" in cooperation with the studio "Magic Mountain" (with the support of the Ministry of Culture of the Russian Federation)

The script "Sand Runs Fast" ("Who Will Be My Husband?") Was specially awarded by the Lyubimovka-2014 Festival of Young Drama

One of the specializations of the Magic Mountain studio is the creation and promotion of debut films:

"Borovsk Effect", 80 min, documentary project, author Boris Minaev, directors Polina Zavadskaya and Yulia Grebennikova, 2019 producer and artistic director Daria Khrenova
- Project-winner of the pitching of the Film Festival -2018, support of the Heinrich Böll Foundation
- film-participant of the International Film Festival "Artdokfest", special program "We Can Repeat" (December 2019) Moscow, Russia
- show at the Museum of the History of the Gulag and the International Memorial, January 2020
- online screening of Novaya Gazeta in the top ten films, January 2020
- screening at the Yeltsin Center in Yekaterinburg
-participant of the festival Date with Russia (online)
-The Râșnov Film and Histories Festival, edition # 12

- Head of the documentary film workshop of the Summer School (Russian Reporter). Dubna-Kimry, 2016