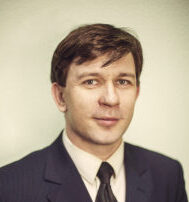 Konstantin Davkaev Chief Executive Officer of the «Sinergo» company. Born in the city Novokuznetsk, in a region with a developed mining industry. Received his first higher education at the Siberian State Industrial University at the Mining Faculty, specializing in «Underground mining of mineral deposits».

He began his career in 2000 as an underground miner at the «Yubileynaya» mine of the «Yuzhkuzbassugol» concern.
In 2000, Konstantin Davkaev entered the position of chief specialist of the automation department at the Novokuznetsk branch of the Kuzbass Transport Bank, which later merged with «Sibacadembank». In 2002 he was transferred to the position of head of the automation department.

From 2004 to 2006 he worked as the head of the information service of the «Sibuglemet» holding.

In 2006, K. Davkaev created the «Sinergo» company specializing in the development, implementation and maintenance of information systems for the automation of mining enterprises. Together with the «1C» company, the «Sinergo» company under the leadership of K. Davkaev released the solution «1C: Mining Industry 2», implemented at a number of leading mining enterprises in Russia. At the moment, software products developed by «Sinergo» allow automating a full range of processes from the owner to the dispatcher. The experience accumulated by the company is unique and is in demand by the mining enterprises of Russia and neighboring countries.

Possibilities of software products of the line «1C: Mining Industry 2»

Integrated automation of the enterprises of the «Industrial and Metallurgical Holding» based on the solution "1C: ERP Mining Industry 2".

At two enterprises of the «Industrial and Metallurgical Holding» - «Plot Koksovy» and «The washing plant Berezovskaya» - an integrated enterprise management system was created based on the «1C: ERP Mining Industry 2 system». The transparency of the enterprise was ensured and, as a result, the quality of business process management was improved. Due to a single entry into the system of economic and technological operations. Due to the maximum use of the means of integration with existing systems at the enterprise, labor costs for accounting, preparation, and analysis of reports on the main and auxiliary production processes have been reduced.

The «1C: ERP Mining industry 2» system is integrated with the systems of the «Industrial and Metallurgical Holding» - «1C: Holding Management» in procurement and supply management and with «1C: MDM. Normative references Management». Integration with the «1C: Salary and Personnel Management» and «Traktir» systems was also carried out at the «The washing plant Berezovskaya».